The Language of Boris Johnson

I feel compelled to write this post about the language our alleged Prime Minister Boris Johnson uses to deride his male rivals speak volumes.

Whilst the term 'surrender bill' has rightly been condemned, I'm sorry to see that some of his other choices have been overlooked. In the last week alone Johnson has chosen to call the leader of the opposition, Jeremy Corbyn, a 'big girl's blouse' in the Commons, whilst a leaked, handwritten note referred to former PM David Cameron as a 'girly swot'. 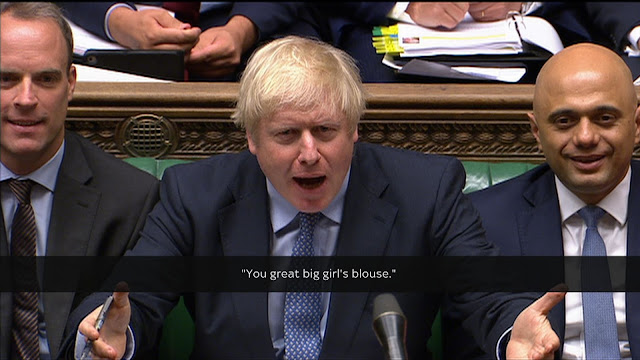 What does this language tell us? Well, it tells us exactly how little respect the twice-married, serial adulterer has for women. For these terms reveal to us that Johnson believes women are pretty poor and inferior beings. Worse, he believes that the patriarchal society he helps to prop up believes this to be the case too.

Can the 32 million women who make up half of the UK's population prove him wrong by voting anyone but Conservative come the next election? I hope so. This sexist, overgrown schoolboy bully needs to learn a lesson. He needs to learn that words have repercussions.
Posted by Mark at Tuesday, September 10, 2019