"My mum was quiet on the journey, which didn't worry me because I knew from last year it was just love and the left-hand drive"

That excerpt, which I've highlighted because of that beautiful phrase 'love and the left-hand drive' (I mean, that could almost be a Billy Bragg album title, right?) is from author Jo McMillan's 2015 debut novel, Motherland, which is a semi-fictional account of her teenage years, when she spent her summers with her mother, an active communist, in East Germany as part of an educational programme run by the GDR's Ministry of Education. 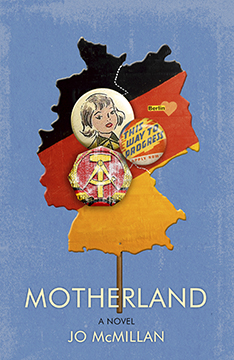 Motherland is full of beautiful, quirky little touches and turns of phrase like that, which just about save it from the vagaries you get elsewhere in the narrative.

Spanning 1978 to 1984, the story concerns Jess, the daughter of the only communist in Tamworth, her schoolteacher mother Eleanor - a marvellously eccentric, highly-strung and determined creation. When we meet Jess she is 13 and her belief in the GDR, the Soviet Union and Communism, is unflinching. She sells the Morning Star (or at least, attempts to sell it) with her mother to a disinterested and antagonistic Tamworth town centre every Saturday, and dreams of life at the other side of the Iron Curtain ("It's not really an Iron Curtain" Eleanor says at one point, "More a Veil of Misunderstanding")

That dream comes true when Eleanor is invited over to the GDR in the summer of '78 as part of a group of sympathetic teachers from across Western Europe. There, Jess meets the enigmatic teenager Martina and a strong friendship develops, just as Eleanor falls for Peter, Martina's widowed father; a love that is one of the two reasons for the aforementioned silence on the journey back.

But when Peter is dispatched for two years  of solidarity work in Laos, the trouble starts and Jess realises the GDR isn't necessarily a place for love. Slowly, in this tragi-comic portrait of an unusual childhood, Jess begins to think for herself as she approaches adulthood and the bonds between mother and daughter begin to change. 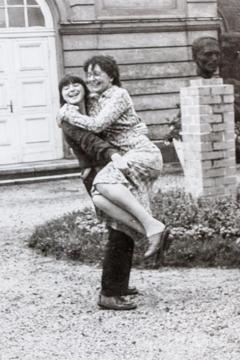 The author and her mother, Isobel, in Potsdam, 1978

I rather enjoyed Motherland, primarily for its little character touches, than the story as a whole. I would recommend it to anyone who has read and enjoyed the memoirs of similar communist youths such as Alexei Sayle and David Aaornovitch. It seems we're having something of a boom period for these kind of stories now.
Posted by Mark at Sunday, September 18, 2016