The Strange Case of Dr Jekyll and Mister Hyde

Curiously one of the books I bought and read last week whilst away on holiday was a book my friend and fellow blogger Cait had also been reading, namely Robert Louis Stevenson's classic The Strange Case Of Dr Jekyll and Mister Hyde 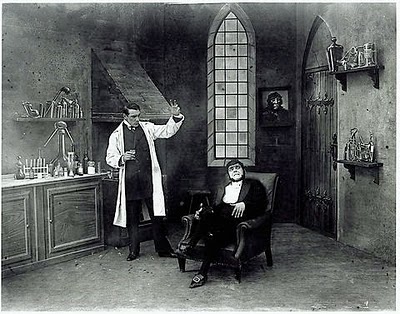 I'm not going to bore or insult anyone detailing the plot of this splendid Gothic novella as surely everyone knows the tale through the myriad of adaptations, updates, reworkings and homages, spoofs and skits. Nor am I going to give a detailed review, or a personal take on what I got from reading it, as I still don't think I'm very good at reviewing literature anyway and besides Cait has done a review far better than I could. What I will say though is that it is eminently readable, focusing as it does largely on the flow of dialogue almost like a good bar room tale or ghost story by the fire on a winter's evening. I will tell you that I purchased the Collins Classic edition in a small independent book store in the delightful market town of Skipton for just one pound, alongside other such Victorian literary classics as Dracula, Frankenstein and 20000 Leagues Under The Sea, making a total of four pounds for four very good novels indeed. Not bad eh?

I follow the Rebus novelist Ian Rankin's belief that Jekyll and Hyde is one of the most Scottish novels ever. Which, on first inspection, may be strange thing to say considering the novel is set in London and actually written in Bournemouth by a convalescing Stevenson, waking from a fevered dream to commence writing it at a rate of 30,000 words in just three days. The writer was a Scot and the London locale in the novel is actually his native Edinburgh. Stevenson used a real doctor John Hunter as a basis for Jekyll, which is in itself a Scottish name, and the house that Hunter resided in on Leicester Square is described as was in the novel as Jekyll's home. Edinbugh is a city which Rankin claims had a "Public face and a private vice" A city which lived a duality, between the old and new town, the rich and poor living cheek by jowl. That the former would cast off their daytime air of respectability at night to visit the latter in the town's fleshpots is an integral part of that duality which is the focus of the novel, but what is ultimately very interesting is that Stevenson himself was one of those 'sightseers'; ladies of the night knew the young author simply as 'the man in the velvet jacket'. Here, everything could be obtained from wine women and something that is much closer to the novel; drugs. The potion Jekyll concocts and devours to alter his mental and physical state, reverting to his Freudian id being a metaphor for drugs.

With all that in mind one has to wonder just how much Hyde was in Stevenson's own Jekyll? This is a tantalising notion when one considers that Stevenson burnt his original manuscript for the novel after his wife Fanny read it.

The legend is that Fanny, as was customary, read the manuscript and made comments in the margins for her husband to peruse and consider later. It is said that Fanny felt the story was an allegory but that he had failed to address it as such. On reflecting upon this Stevenson is alleged to have burnt his manuscript, proudly showing her the ashes before commencing on the work all over again.

We all love a good conspiracy or theory - just why was the manuscript destroyed (if indeed it was?) and why did Stevenson set the story in London when he was writing a thinly disguised Edinburgh? Many posit the notion that the original was too close to the bone, too revealing about something either directly in Stevenson's character and past (was he truly a Mr Hyde?) that could implicate him or had he been writing something potentially libelous about a contemporary? Did he switch locations to avoid detection and keep a return to his hometown open for him?

The other aspect to the novel is of course the legendary Deacon William Brodie, who was a respectable Edinburgh gentleman, councillor and cabinet maker by day and cutthroat highwayman and burglar by night, a secret activity he would undertake to fund his gambling habits. Eventually caught, his reputation in ruins, Brodie was hanged until dead by a gibbet he had ironically been the craftsman of. Stevenson had long been fascinated by Brodie, and legend has it as an infant there was a piece of furniture created by Brodie in his nursery which his nanny would delight in creating vivid stories around concerning the notorious rogue for the young Stevenson, which would subsequently give him nightmares. Nightmares which continued to plague him throughout his life. Stevenson's interest in Brodie would originally form the basis of a play he wrote in his teenage years before adapting it as a story entitled Markheim in 1884. It was this short that would form the basis of this most famous novella.

Whatever the real story behind it all, and let's face it it's only fitting that such confusion and suggestion of duality and misdeeds surrounds the tale, The Strange Case Of Doctor Jekyll and Mister Hyde remains the book to read about secrets and dark sides inherent in man. As such it is still immensely relevant and a rewarding read to this day.