Vicious and The Job Lot

For the past eight Mondays ITV (or ITV1 as it occasionally seems to want to call itself) has had the nation hooked on Broadchurch, a whodunnit that focused on the murder of a teenage boy in a small seaside community, it starred the National Treasure that is Olivia Colman and a surprisingly good David 'Hollywood aren't returning my calls' Tennant.

It firmly put ITV back on the map in terms of contemporary drama.

Now filling the Monday night at 9pm gap that Broadchurch has just vacated, ITV hope to put themselves on the map for sitcom (something they have never had a great track record with, except for maybe Rising Damp and Shelley - two sitcoms that have links with these new ones; Rising Damp sharing Frances De La Tour with Vicious and Shelley about a man who claims benefit, The Job Lot being about a benefit office) with two new half hour comedies; Vicious and The Job Lot. 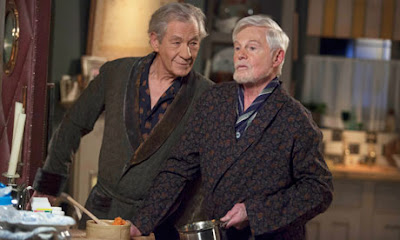 Vicious stars Sir Ian McKellen and Sir Derek Jacobi as Freddie and Stuart, an old gay couple who have spent the past 48 years living together and bickering. Constantly. Written by Will and Grace's Gary Janetti and playwright Mark Ravenhill, it breaks new ground in that it is the first time a homosexual couple have been at the fore of an ITV sitcom. However, that's all that is new about it; as Vicious is wonderfully reassurringly old fashioned. Filmed before a studio audience that has been helped by laughter of the canned variety, it's very theatrical and stagey, perhaps reflecting the fact that McKellen's Freddie is a failed act-or dahling and helped by the leads actual theatrical credentials. In fact I can imagine this scoring much better as a stageplay than a weekly sitcom. In lesser hands this would be a groan inducing affair, it's set up so old to have no relevance. But with McKellen and Jacobi it actually works and the ball they're clearly having alongside a cast that includes Rising Damp's Frances De La Tour is positively infectious. I laughed. And that's more than I can say for Ben Elton's BBC1 Shitcom The Wright Way.

Perhaps inevitably there have been some complaints and very negative reviews. Christopher Biggins, the gay actor, has claimed that it is stereotypical and may cause offence; a criticism that to me sounds like sour grapes that he wasn't involved and seems to ignore the fact that it is placing gay characters in the lead for once. There have even been snipes at the old fashioned set up, including one petty comment that the characters have a land line phone rather than a mobile. Seriously, these people are old age pensioners, perpetually living in a bygone time of their own devising (they don't even open the curtains to the world beyond as we saw in one funny scene in which their new neighbour did just that, sending them scuttling off into the kitchen like vampires) why wouldn't they have a land line?!

Vicious  may be old fashioned, campy, hammy, OTT and a touch out of place on TV, working better on stage perhaps, but it put me in mind a little of Withnail and I, Who's Afraid Of Virginia Woolf and Staircase. Ignore the critics, I'll definitely be tuning in for more.

The Job Lot on the other hand put me in mind of things much closer to home, namely my past. 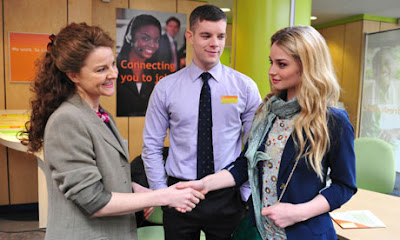 Let me explain; for six years of my life in my twenties, I worked in jobcentres. I could have wrote The Job Lot and actually, all modesty aside, I could have wrote it a damn sight better. In the first few minutes I received a handful of text messages all saying the same thing, as well as comments like 'is Russell Tovey's character based on you?'

If Vicious is a throwback to 1970s sitcom settings where the com is firmly of the sit variety, then The Job Lot is a throwback to The Office. Indeed it labours with some difficulty under the shadow of Gervais and Merchant's masterpiece because it's so similar. It's not The Job Lot's fault it cannot measure up to that genius, The Office has ruined any clerical based sitcom to come after it, but it is a fault that Tovey's character, a likeable everyman stuck in a dead end job watching his dreams get quashed by the second, is essentially Martin Freeman's Tim. So similar is he that I almost expected him to look straight to camera and sigh.

The Office came out in the early 00s when I actually worked in the jobcentre. At that time myself and the colleagues around the same age loved it. It spoke to us. It was just like working at the jobcentre. The Job Lot on the other hand isn't. That's not to say it isn't realistic, at times. I've had the misfortune to work alongside a few middle aged jobsworths like Angela, skivers who use the rulebook to excuse them from work or empathy, and I certainly know how Tovey's character feels, but in other respects it was just far fetched. Yes the stupid bureaucracy means that to make a claim you have to ring a number from the office you want to claim in (something that never made sense to me even when I worked there) but that number directs you to a regional office that handles new claims, not the very office you're stood in. Local jobcentres don't put on work based classes either. Would that they did.

Ultimately the downside to The Job Lot was that there simply wasn't enough laughs. From my experience I know how ridiculous working in such a place is, and I can recall many funny stories - as well as downright terrifying stressful ones. But then maybe the real downside is as I say I'm too close to the subject matter both in my past and also my present; currently being too sick to work and struggling with the red tape benefit claims inevitably throw up at you.